skip to main | skip to sidebar
Please feel free to link to this blog or use the handy e-mail tool at the end of each post. However, all contents of this page are copyrighted by Cindi Huss. Reproduction in whole or part without written permission from the author (Cindi) is prohibited. This includes all images unless otherwise noted.

Just when I thought I'd gotten back in the posting groove . . . my two left feet betrayed me! Was heading out to the deck to water the tomatoes and potatoes (that I haven't killed yet--they're actually thriving!), tripped on the threshold, and ended up losing a tooth (has been reinserted), getting 5 stitches in my bottom lip (they've been removed), and scraping and bruising both knees and an ankle. Yeah--ouch! I've healed remarkably quickly, though, thank goodness.

Didn't stop us from going on the trip we planned for VA and DC, but that's because Sir Robert, Knight of Damsels in Distress (so dubbed by my mother with a hearty second from me) managed most of the preparations and all of the driving. I'm mostly recovered now, but still can't bend my left knee all the way, so will hold off on dyeing but am back to stitching and such--Yea!!!

So will try to get back in the posting groove again--here's a start!
Posted by Cindi at 4:19 PM No comments:

Nearly a year in Tennessee

Well, we've been here nearly a year and feel very at home. We've made the transition pretty well, the kids are thriving, DH loves his job, and I am in heaven in my studio. The weather is warmer in the winter and cooler in the summer, there's almost always a little wind, and the clouds (and thunderstorms) are way more impressive.

One of the hardest things to get used to is that things like pita bread are considered exotic here and only show up seasonally in most grocery stores. I haven't really figured out what the pita season is, but that's what the lady at the deli counter told me.

The other unexpected oddities are a couple of expressions.

A friend of ours is a physician's assistant (also a transplant to the area). When he first moved to the area he'd ask a nurse or an orderly to do something and they'd reply, "No, I don't care to." He, of course, was a little taken aback at this challenge to his authority, but figured he just had to earn his wings as the new guy and do it himself. But when he went to do it he'd find it already done. Turns out that in NE TN, "No, I don't care to," means, "Sure, I don't mind."

Folks also use this expression in a statement, not merely as a reply. For example, DH got a message asking him to "Please give me a call back if you don't care to."

And then there's "Bless his heart." You can say anything and add that at the end to make it all right, like, "That whole family has enormous heads, bless their hearts," or "He just can't hold a woman or a job, bless his heart." Now if anyone blesses my heart I wonder what they really mean. :-)

Northeast TN doesn't have a lock on strange expressions, though. Took us years to get used to the dual meaning of "Are you all set" in Western MA. If you're in line at a sandwich counter in western MA and the wait person asks "Are you all set?" . . . it's not a yes or no question.

If you answer "yes," chances are good the waiter will walk away thinking you have already ordered.

If you answer "no," chances are good the waiter will walk away thinking you need more time to decide.

And in Pittsburgh "City Chicken" is pork or veal. Go figure.
Posted by Cindi at 12:54 PM 2 comments:

I'm a little behind on the whole blogging thing, but have had some company and some deadlines, all of which ended well, so am trying to catch up now.

So, I went to a retreat in January and the first thing I learned there was how to make cheese. Cheese?! Yup, and it was excellent! Here's a little something from Barbara Kingsolver's Animal, Vegetable, Miracle (page 131):

" . . . it takes less time to make a pound of mozarella than to bake a cobbler, but most people find the idea of making cheese at home to be preposterous. If the delivery guy happens to come to the door when I'm cutting and draining curd, I feel like a Wiccan.

"What kind of weirdo makes cheese?"

Anyhow, inspired by the great mozarella and ricotta we made at the retreat and that quart of goat milk Rosemary (the cheese mistress) game me, I returned home ready to strike out on my own. However, a local scarcity of renet meant I had to make panir. Boy, that was a shame! Mmmmm, mmmm was it good! 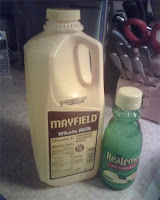 Panir is made of milk and lemon juice. That's it. Well, you can put a little salt in it, but I just salted mine before I fried it lightly and it was great. I hear you can do anything with panir that you would do with tofu, and I recommend it, but then again I'm not crazy about tofu.

I was a little worried because I don't have a cheese thermometer, but it turns out that my electronic thermometer is perfect for cheesemaking because I can enter a target temperature and an alarm goes off when the milk reaches that temp. Just about takes the brainwork out of the process. 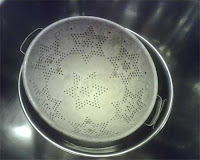 Anyhow, all the utensils and surfaces you use during the precess have to be super clean so you don't contaminate the end product. Shiny, eh?!

I got my recipe from fiascofarm.com. It was easy to follow and there were loads of other recipes as well.

So, after the milk gets hot enough and stays there for a few minutes you add the lemon juice and stir gently. All of a sudden you have curds and whey instead of hot milk. It's cool. It's magical. It's alchemical! 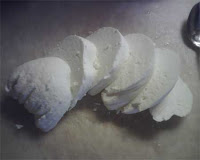 Anyhow, I just strained the cheese in a collander lined with a clean flour-sack-weight dish towel then hung it over the bowl to drip a while.

Some time later I had a ball of cheese which I cubed and cooked in a simmer sauce (shown here--doesn't it look good?). 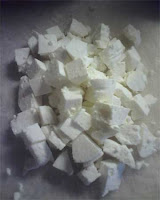 I also tried making my own saag panir--it was all right, but bland. It will be better next time now that I've finally unpacked my Madhur Jaffrey cookbook. (Thanks, Margaret--I'm still using it after--yikes--20 years!)

By the way, don't just let the whey run down the drain! I use it in breadmaking instead of water or milk, and when used as the liquid for cooking rice or potatoes it gives them a nice creamy mouth feel without fat. It also is supposed to be great for watering gardens if you can't get in to using for cooking. 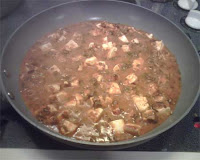 As an aside, once I managed to get my hands on some (vegetarian) rennet in March I made mozarella and ricotta as well. The mozarella was amazing and the ricotta (made with the whey left from the mozarella process) was beyond words. I don't particularly care for ricotta, but this was like nothing I have ever tasted before. So good!

I used them together with some cottage cheese I made--yup, I'm a cheesemaking fanatic now--for a lasagne (noodles cooked in whey, too) and it was wonderful. Of course using the sauce my eldest made and a little homemade italian sausage helped, too.

I'll add photos of those processes once I repeat them. Just paid attention to the process the first time. And paying attention sure paid off!
Posted by Cindi at 12:35 PM No comments:

Next step in creating the depth of this field. Can you see the difference? (My photo skills not on par with my quilting skills.) 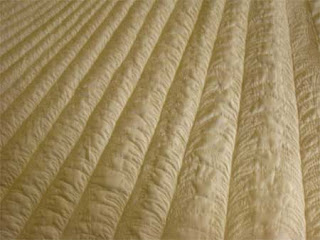 Sculpting With the Quilting Stitch

I just love my medium!! Working on a quilting study for my current work, and it's just so full of yummy texture--and this is only the beginning. Quilting really does make the quilt! 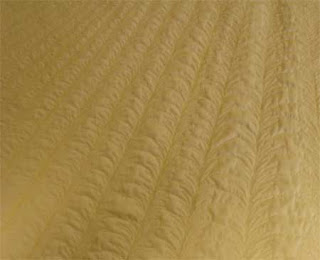 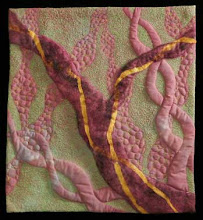 Cindi
I use hand-dyeing, needle felting, and wet felting to enhance my extreme-quilted fiber reliefs. I also design traditionally constructed contemporary quilts. I teach classes on art and quilting and draw on my past life (as a trained journalist, copywriter, and freelancer) to write articles and essays on quilting and the business and philosophy of art.

For more about my art, classes, and articles visit

These Are a Few of My Favorite Links

Words to Live By